Another installment of my old MySpace blogs, this one telling the tale of returning back to the 48 Hour challenge experience, a year after The Lords of Dragonhoth …

The Revenge:  Another 48 Hours

While we were happy with how “Dragonhoth” came out with last year’s 48 hour film challenge, the second time around we wanted to raise our game up a bit.  The judges of last year’s event seemed to react less to laughs and more to technical achievements.  Of course we didn’t want to sacrifice laughs or character, but we did want to make a faster paced, fullbore comedy, with bigger laughs and better cinematography.  And hopefully this time we’d make a comedy that was so obviously a comedy that the judges wouldn’t put it in catagory of drama like last year (seriously…  SERIOUSLY?!?).

Two downsides of ‘Dragonhoth’ was that the movie was basically “talking heads”, and that the audience for the film was a bit narrower than our other films.  On the upside, however (and in comparrison to this year’s effort), “The Lords of Dragonhoth” concept was more unique and there was more time taken for character.  And in a lot of ways it makes it much more memorable movie.

So we spent twice as much money (and when I say we of course I mean me), amped the energy up, made the comedy more outrageous and visual, and really put time (or atleast as much as a 48 hour movie challenge will allow) into the visuals.

Last year our Theme was “Heroism.”  This year it was “Miscalculation.”

Here are production stills from Squishy Studios “The Hand You’re Dealt”, a comedy about the world’s worst tarot card reading and the hilarity that ensues!

We feel pretty good about it, although it’s hard to get perspective on it at this point, but everyone did a great job.  I’m hoping for the best (but expecting the worst).  Come out and support Squishy Studios if you can make it!  Yay! 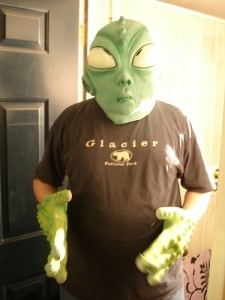 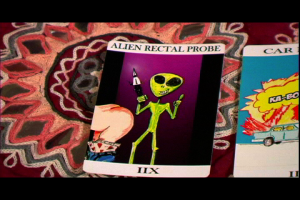 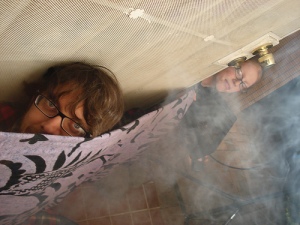 It was crazy and nerve-wracking last night, but a big success for Squishy Studios at the 2008 Almost Famous 48 Film Challenge screening.  We fared much better than last year with out new movie “The Hand You’re Dealt.”

In the entire film festival of (I believe) 45 entries, from all the different judging catagories tallied together (of Story, Cinematography, Style, Use of Prop/Line, Use of Theme), we placed as the 4th highest movie in the challenge.  The three awards we recieved were:

Man alive, it’s really nice to finally win a g-damn award.    🙂   Enjoy “The Hand You’re Dealt” and let me know what you think!  Thanks to everyone who helped make it and who showed up at the screening! Kudos also to the other filmmakers, especially to the ones that made kick ass movies but totally got hosed by the judges. “La Force avec toi!”